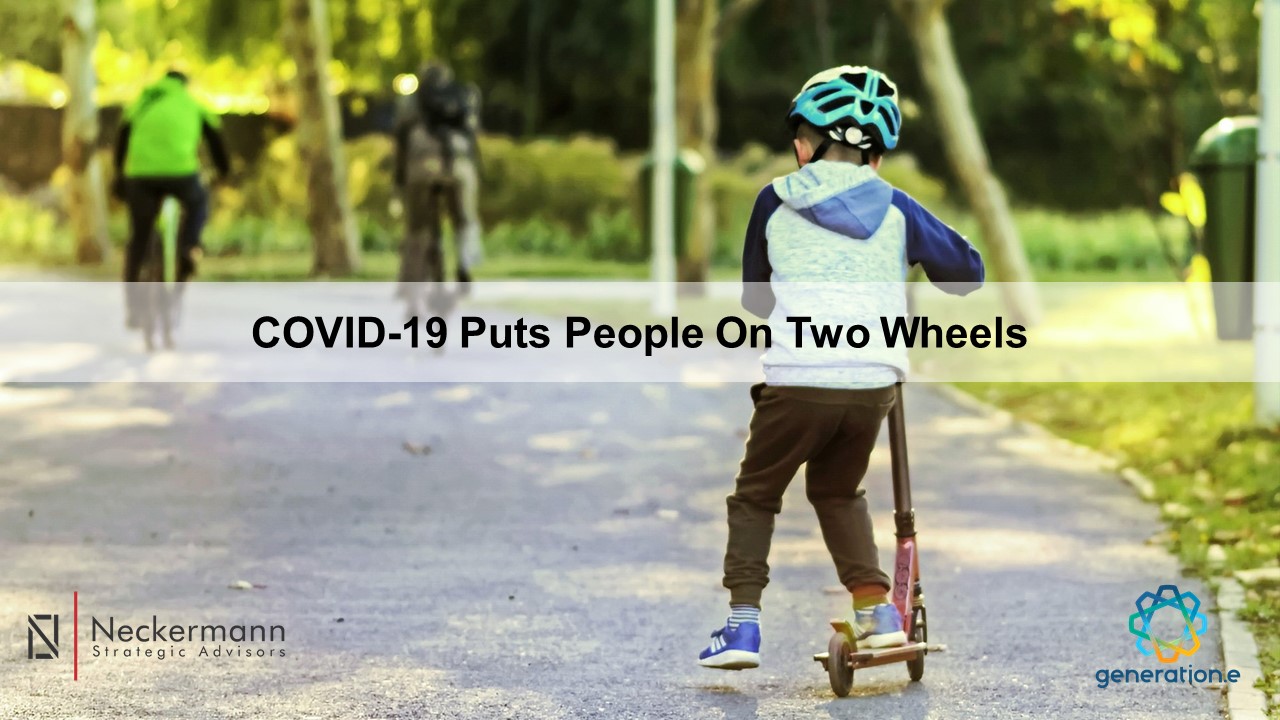 This article was first published on the 14th of May here

Here is a case study comparison of the latest active and micromobility investments from governments in Europe.

Winston Churchill said on the eve of creating the UN, “Never let a good crisis go to waste.”[1] Just a few days after VE day, this quote has probably never resonated that much since the first time it was pronounced. Many countries in Europe are easing lockdown measures this week and more people will soon be moving around cities once more.

At Generation.e and Neckermann Strategic Advisors, we understand that public authorities need to find the right balance between social distance and sustainable modes of transport. It seems to us that active mobility and micromobility solutions – i.e. e-bikes and e-scooters – are poised to make our urban areas get on the move again. Morton Kabell, who co-chairs the European Cyclists’ Federation, is convinced that the transition to such modes of transport “is necessary if we want our cities to work.”[2] This is why the first article of our series deep dives into this challenging but essential transformation of our city centres. Articles that follow will highlight many of the other topics from the upcoming Smarter Mobility Europe LIVE (1 – 3 of July 2020).

The development of active and micromobility solutions is supported by international organisations including the World Health Organisation, who recently stated, ‘’whenever feasible, consider riding bicycles or walking: this provides physical distancing while helping to meet the minimum requirement for daily physical activity.” The positive impact of bicycles on more sustainable urban living no longer need to be proven; not only do they provide social distancing, but also better air quality, more active citizens, lower congestion, and can even help in the economic revitalisation of city centres.

COVID-19 represents a unique opportunity for public authorities to promote active mobility as the key to citizens’ health, freedom of movement and environmental concerns.[3]

The EU Commission also recognises that cycling and walking are critical to keeping city inhabitants mobile “given that public transport has been reduced as a result of the pandemic.”[4] The favourable weather Europe is experiencing since the beginning of the lockdown plays an important role in increased bike adoption. But is the biking-boom temporary? Perhaps not. “Most cities are now at the stage where The Netherlands was in the 1970s, breaking with decades of car-centric thinking and starting to experiment with solutions that give cycling more and safer space on the roads,” said Mr. Brömmelstroet, who teaches urban planning and mobility at the University of Amsterdam.[5]

So what will change after COVID-19 that will make our cities more active and micromobility-friendly? The below overview highlights the main decisions and plans both taken at a national and local level.

In February 2020, just prior to the crisis, the UK government released a plan to invest 2.4 billion pounds (ca. €3 billion) within the next 5 years to improve the cycling and walking infrastructure. [6] Last week, another program of £250m (ca. €285 m) was announced to boost the implementation of cycle lanes and (finally) fast-track e-scooter trials. Proponents of this action plan also suggest the introduction of a speed limit (20mph, ca. 32 kmh) within cities and ban sales of new ICE cars and vans by 2030.[7] Beyond this, many additional steps are being taken at the local level:

London wants to fast-track mass walking, cycling network and e-scooter pilots. The temporary limited public transport offering and the near-future lighter lockdown measures would result in up to 8 million additional journeys a day in the capital. In one way or another, these trips will have to happen. Besides, social distancing may shift part of public transport journeys to private car trips which would dramatically increase congestion, pollution and safety. The “Mayor’s Streetspace Plan” aims to address this concern by allowing millions of daily commuters to safely ride a bike and walk. This plan includes new lanes and wider footways for people to safely queue for shopping and walk at the same time. Early models from TfL suggests that there could be ten times more miles cycled and five times more distances walked than prior to the COVID-19 breakthrough.[11]

The French government announced a series of plans to put more people on two-wheels. First, a €20 million program to support bike-repairs, with direct-to-consumer vouchers of up €50.[12] Second, a “sustainable mobility package” is offered by companies to support employees with up to €400 per year for bommuting by bicycle or pooling.[13] Third, the local government of  Île-de-France (Paris region) will offer its citizens a subsidy of up to €500 to buy e-bikes.[14]

Furthermore, Paris city council intends to implement over 650 km of new cycle lanes[15] at a cost of some €32 million.[16] This objective is part of an ambitious program proposed by Mayor Hidalgo called “The city of fifteen minutes”. The idea is to give residents access to everything they need with a commuting time of less than 15 min. Carlos Moreno, a smart-cities professor at the University of Paris Pantheon-Sorbonne, said that this plan “would include making many key thoroughfares in Paris inaccessible to motor vehicles; turning currently traffic-choked intersections into pedestrian plazas, and creating ‘children streets’” – not unlike what Barcelona has done with its Superblocks. One of the first steps has been to ban private vehicles from Rue de Rivoli, otherwise a main thoroughfare.[17]

Notoriously congested Brussels has announced a plan in reaction to COVID-19 to limit speeds to 20kmh within its inner ring (R20) and expand its bike network with an additional 40 km cyclable lanes.[18]

Italy’s Transport Minister Paola de Micheli has announced a €500 purchase subsidy for bikes, intended for people living in municipalities of more than 50,000 inhabitants.

In Milan, 70 per cent of residents are now supporting the plan called “strade aperte” (open streets) which includes an addition of 35 km of streets for bicycles and pedestrians [19], speed limits and a wider pavement – a practice known as a “road-diet”.[20]

Due to its historic street pattern, it’s challenging to implement new bike lanes in Rome, the eternal city. Yet, during the COVID-19 crisis, the city council has temporarily painted over 150 km of bike lanes for commuters. [22] While this sounds promising, the city still needs to progress its cycling infrastructure with more bike parking, connections between lanes in order to achieve higher cycling adoption in comparison with other European countries according to ISTAT (Italian statistics institute). [23]

The case is quite similar for Turin where the infrastructure is equally challenging to adapt. [24]

Bologna, on the other hand, presents promising infrastructure developments. The city in 2018 set up its “Sustainable Urban Mobility Plan” (SUMP). This program includes the “Bicipolitana” network project that consists of 493 km of cycle lanes, for which some sections are already built and others in progress or to be rolled out. Whilst the original plan was to complete this program by 2030, the COVID 19 crisis has accelerated ambitions and the updated target is to deliver 60% of the transformation by the end of 2020.[25]

Whilst it is still unclear if tourists will be able to ride a bike along the beach this summer, Spain and its two largest cities, Madrid and Barcelona, are taking key, long-term initiatives in support of sustainable urban mobility.

Madrid, the city of the merengues, has closed many streets for people to practice outdoor activities. Even one of the main avenues, the Paseo de la Castellana, is opened during weekends and festivity days only for pedestrians.[26]

In Barcelona, the city council, together with Transports Metropolitans de Barcelona (TMB) and Barcelona de Serveis Municipals (B: SM), took urgent game-changing decisions for a total of €4.4 million to keep the city moving. A total of 12 km of main streets will be permanently returned to pedestrians. The list includes Avinguda Diagonal, Gran Via, Via Laietana, Consell de Cent, Rocafort and Girona. Cyclist will also receive an additional 21 km newly built bicycle lanes on 10 different avenues.[27]

The home of some of the most famous car manufacturers is also proposing significant transformations. Residents in 133 German cities have submitted applications for temporary bike lanes to their local authorities. This initiative comes from a campaign by an environmental NGO called Environmental Action Germany (DUH).[28]

In Berlin, some parts of the city proceeded to widen existing cycle lanes during the crisis to keep nation-wide requirement of 1.5m distance between citizens.[29] While these new lanes are for now temporary with red-and-white warning beacons, temporary signs and yellow foil barriers, they could stay permently post COVID-19.[30]

Vienna has also implemented new measures to limit the speed in its inner-city to 20 kmh and reorganise the infrastructure to enhance shared modes of transports.[31] The complete and live map of the transformations can be found here.

Last but not least, Budapest has already built an additional 26 km of bike lanes to its existing network since the coronavirus breakout. To maximise the utilisation rate and micromobility adoption by the end-users, the bike-share service MOL Bubi has reduced prices during the crisis and established an iterative plan which will assess the impact of the new infrastructure and revise based on the lessons learned what are the next necessary steps for the city. [32],[33]